James B. Manor moved his family from Tennessee to Texas in 1836, first settling at Webber’s Prairie. In mid-1838, he received two land grants totaling 1920 acres. On November 12, 1838, he had surveys made on prime prairie land located between Wilbarger’s Creek and Gilliland’s Creek in central Texas. He soon built a log cabin a short distance east of Gilliland’s Creek in which he and his family lived until he was able to construct a two-story home in 1842, utilizing the log cabin as the kitchen.

In 1849, a group of Travis County citizens petitioned the Commissioner’s Court to build a road from Austin to Brenham. James Manor was one of five men appointed by the Court to lay out the road from northeast Austin to the eastern Travis County line. When completed, the road ran directly in front of James Manor’s home.

As early as 1851, citizens of Austin and Travis County held meetings discussing having a railroad built from Houston to Austin. A committee of ten men was appointed in 1855 to hold meetings with railroad officials for that purpose. One of those men was Silas Parsons, a close friend of James Manor and founder of the first school built on Manor’s land in 1854. 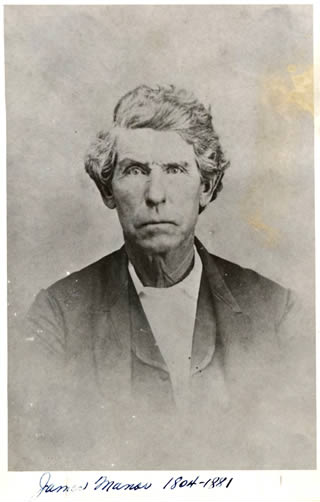 In late 1858, a survey was made laying out a route for the railroad from Brenham to Austin with the railroad going through Webberville, but When the Civil War broke out in 1861, plans for the railroad were put on hold. After the war a state Constitutional Convention was held in Austin in 1868; at which time they authorized the Houston and Texas Central Railway Company to construct this railroad.

In April 1870, a committee of ten men was appointed to meet with this Railway Company to find out what was necessary to get the railroad built. One of those ten men was James Manor. On March 30, 1871, an agreement was signed between James Manor and the Railway Company in which he gave them a strip of land 200 feet wide, called the Railroad Reservation, through his property on which to build their railroad.

On November 30, 1871, a deed was signed between James Manor and the Railway Company giving them 200 acres of Manor’s land, surrounding the Railroad Reservation, on which to lay out a town and build a railroad station. Theodore Kosse, an engineer for the Railway Company, surveyed and mapped out a new town on the 200 acres, now owned by the Trustees of the Railroad. A document dated January 10, 1872, signed by the Trustees, detailed the laying out of the town and stated that it was to be named “Manor”. It was no coincidence that the Austin to Brenham Road, laid out 20 years earlier, ran straight through the new town on Eggleston Street.

Two more deed records, both dated January 20, 1872, were signed, giving ownership of half of the blocks and lots in the new town of Manor to James Manor and the other half to the Houston and Texas Central Railway Company. A few days later, ads were printed in Austin newspapers advertising lots for sale in Manor. The new town was born and steadily began to grow. Cotton was king; being grown on plantations all around the town and many thousands of bales were shipped from Manor every year. By the end of the nineteenth century, Manor was said to be the second largest town in Travis County.